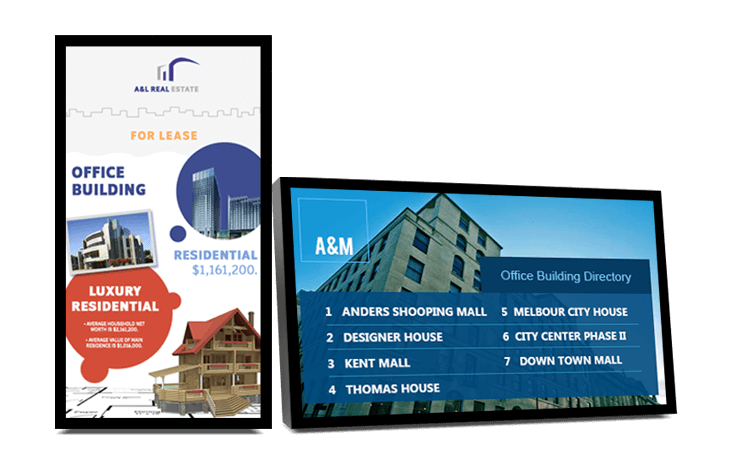 Digital Signage displays are manufactured with commercial grade components that allow them to be in constant use 24/7 and you should expect to get at least 50,000 hours of use from Digital Signage displays. Domestic televisions however are not built to be in constant use. They are designed with shorter viewing periods in mind of more like 1-8 hours. If used for extended periods of time, televisions will suffer from image retention and color issues caused by the LCD panel becoming overheated.

Digital Signage displays feature specialised cooling fans and ventilation systems to keep the panel at the optimum working temperature. A Digital Signage display will also have no external buttons or controls unlike a domestic television that normally have some form of exterior buttons that can control the display.
As such a bespoke piece of hardware Digital Signage displays normally come with extended warranty as manufacturers use more robust components in the manufacturing process and are built to last. While domestic televisions do come with their own warranty, this would only cover for use within residential premises and not commercial applications. When something goes wrong with your television after the initial warranty is over, it’s your issue, end of story. It is also worth noting that if a domestic television used in a commercial environment were to cause a fire, this may invalidate your business insurance so it is always essential to see where you stand in regard to warranty.
The main crux of difference between Digital Signage displays and televisions are their functions and how the screen is able to achieve that. Some Digital Signage screen uses an integrated Media Player that can run bespoke Digital Signage software that at its very basic function is capable of displaying images and videos in a constant loop and at its most advanced display multiple media zones such as locked down webpages , RSS feeds, images and videos all in one display. This allows the user to have complete control over the screen and the content on display. Newer ‘smart TVs’ now feature some kind of basic media player that allows for manually controlled slideshows of images and videos that are always in landscape orientation alongside unrestricted access to web browsers. The crucial difference though is that televisions are designed to be used by the broadest audience possible. With just a click of a button anybody can change the content on your television. There is no guarantee that you have ultimate control. In a commercial environment this is a major risk.
Domestic televisions are designed for use within the home. As standard they are optimized for their audience to be only mere feet away on a sofa, in standard lighting conditions and in landscape orientation. Digital Signage screens have a lot more to contend with. To get more eyes looking at their screen they have to have the largest viewing distances and angles available while still being fully versatile in terms of the orientation in which it is used. This is before having to content with more extreme lighting settings found in commercial environments so that is why Digital Signage displays often have brighter displays with a much better contrast ratio in comparison to televisions.
A screen is just a screen; unless it’s a Digital Signage screen. This kind of screen is an amazing piece of technology. Crafted for commercial environments this machine is purpose built for public information display purposes. No matter how much you spend on a television. However much you think you are saving when you don’t buy a commercial grade Digital Signage display, that money will all be wasted when in 6 months or a year you have to buy ANOTHER screen to replace the television when it breaks. Televisions are great in the home but that is where they should stay. With Digital Signage screens, the possibilities are endless.

Key Reasons To Use Commercial Displays for Digital Signage – not Consumer TVs.

• On / off scheduling functionality

Below are the listed benefits in more detail.

Longer continuous operation Most Commercial displays are built for 24/7/365 operation with higher quality and more durable parts. Commercial screens are designed to last longer than consumer T.V’s, even with the increased hours of operation.

Brightness Consumer displays are typically set around 250 nits brightness. This makes them difficult to view in bright environments and absolutely pointless in direct sunlight used as a window display. Specific commercial displays are designed for high-bright conditions with brightness ratings of up to from 500 (for bright internal areas) up to 4000 nits (for window and outdoor environments). These displays also pack a punch with wide viewing angles and high contrast ratings; giving you a reliable professional display to suit the installation environment.

Power on / off Scheduling Most commercial displays can be scheduled to turn on and off automatically reducing the need for human intervention. Using the commercial screen power on / off schedules, critically ensures your signage is actually turned on rather than leaving it to someone to turn on manually each day.

Sleep mode No need to worry about loss of sales or custom due to your display going to sleep after a certain amount of time. Commercial displays can be configured to always stay on and only turn off only when you physically need to do so. Consumer TVs typically do not have the ability to disable sleep mode as this is a default preventative measure to ensure the displays are not left on for prolonged periods when in an idle state.

Enhanced Warranty Unlike the typical one year manufacturer warranty that comes with all consumer displays, the majority of commercial displays with 3 year on site warranty. Did you also know that if you were to use a consumer TV for professional or commercial use, the warranty becomes void or limited?

Orientation Most commercial signage displays can be used in both landscape and portrait orientations. Components within consumer TVs are specifically designed to be used in Landscape orientation only. Also, many commercial displays have near symmetrical bezels specifically for aesthetics when mounted in portrait, not like a consumer tv simply turned on it’s side.

Screen burn protection Anti-burn and cooling features on commercial screens mean there is no need to worry about static content being on your screen for too long and causing permanent burn damage.

Touch Overlay Some commercial displays come with ability to add a touch overlay, avoiding the need to purchase a whole new screen at a later date. This added feature makes a cost effective solution for turning a professional display into a touch device, greatly increasing its functionality.

Videowalls If you want to make one big display from many smaller displays, you’re going to need commercial grade, video wall displays. These type of displays are designed with ultra thin bezels making them ideal for a near-seamless video wall. Another option for large video walls are LED panels that fit together to make as large a display as required- the sort that is used for outdoor advertising or around football pitches.

Built in Media Player Displays such as Samsung’s and LG have built in media players and are suitable for most types of content playback.

If you are interested in adding  digital signage to your business we can help you make the process easier!

We use cookies to ensure that we give you the best experience on our website. If you continue to use this site we will assume that you are happy with it.OkNoRead more